The characteristics of the veins in the San Pedro project, the relatively low temperature of homogenization, and the geochemistry with abundant trace elements and low contents of precious and base metals, make us think that the rocks at the current erosion level represent the upper parts of an epithermal system. 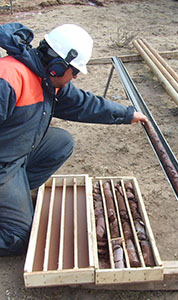 The San Pedro project is in the central part of the Deseado Massif; at 120 km to the NE from Gobernador Gregores. The mining rights are secured by five mineral properties totaling 7200 ha.

Fomicruz has explored the project intermittently since 2001 and has detected numerous veins located in eight areas (Fig. 1). There are several discontinuous and sub-parallel siliceous veins, which are hosted mainly in the Bajo Pobre Formation, although a few ones are hosted in the Chon Aike and La Matilde Formations.

In general, the orientation of these veins varies between 310º and 345º, although a few veins have E-W, N-S or NNE orientations. Their dips are strongly variable (even in the same area) from sub-vertical up to 45º to the east or west. A total length of veins of more than 8000 m has been identified in this project. The veins have continuous lengths of up to 300 m, and discontinuous lengths of up to 800 m. Their more frequent thickness is of 1 to 1.5 m, with a maximum of 8.5 m They often show banded and colloform textures, and occasionally they show breccias. They are formed by fine grained quartz and chalcedony bands, alternating with oxides and hydroxides of Fe and Mn.

In addition to map the lithology of the whole area, Fomicruz collected more than 200 rock-chip samples for geochemistry. The chemical assays indicate that Au and Ag contents are low, returning maximum concentrations of 0.07 g/t Au and 15.6 g/t Ag. In only few cases, base metal anomalous concentrations were detected, including 900 g/t Zn and 945 g/t Pb. There are however, high concentrations of other elements reaching up to 9% Mn, 15.36% Fe, 1.9% Ba, 960 g/t As, 1070 g/t Sb, 2.9 g/t Hg, and 73.2 g/t Tl; the last four elements are often present in relatively high concentrations in the upper parts of epithermal systems.

The drilling of 32 boreholes located in several areas of the project (Fig. 1), summed a total of 5820 m. In the subsurface, Au and Ag concentrations are still low; one exception was registered in the Yanina area, where a few boreholes crossed a strongly argillized interval of rocks, with concentrations of Ag and some other elements, locally very high. However, it Is suspected that those high concentrations may have been produced by contamination of the cores during drilling.

The area called Yanina (Fig. 1) was the most explored in the project; including several boreholes, and a geophysical survey with magnetometry and geoelectric methods. This area shows a few particular characteristics; it is one of the few where the veins are hosted in the Chon Aike Formation, it shows a strongly argillized sector at depth, and the particularity that the silica and Mn veins were only found above the 70 m of vertical depth, what was determined by a fence of boreholes. This is different to what occurs in the Jacinto area, where the veins are also hosted in the Chon Aike Formation, but they are continuous at least up to 129 m depth. The geology and geochemistry of those areas have not been satisfactorily interpreted yet.

The characteristics of the veins in the San Pedro project, the relatively low temperature of homogenization, and the geochemistry with abundant trace elements and low contents of precious and base metals, make us think that the rocks at the current erosion level represent the upper parts of an epithermal system. This is supported also by the presence of parts of a silica sinter to the NW of the Jacinto area (off the project area). Because they are hosted in a stratigraphically higher level than those in other sectors, it is possibe that the Yanina area represents one of the higher portions of the epithermal paleo-system.

The size of this project and its large number of veins suggests that an abundant amount of fluids traveled through the epithermal paleo-system, which make us think that if part of the system was mineralized, large volumes of mineralized material can be found at depth.

Figure: Lithological map of the San Pedro project. The Yanina area was the most investigated in the subsurface with several boreholes. 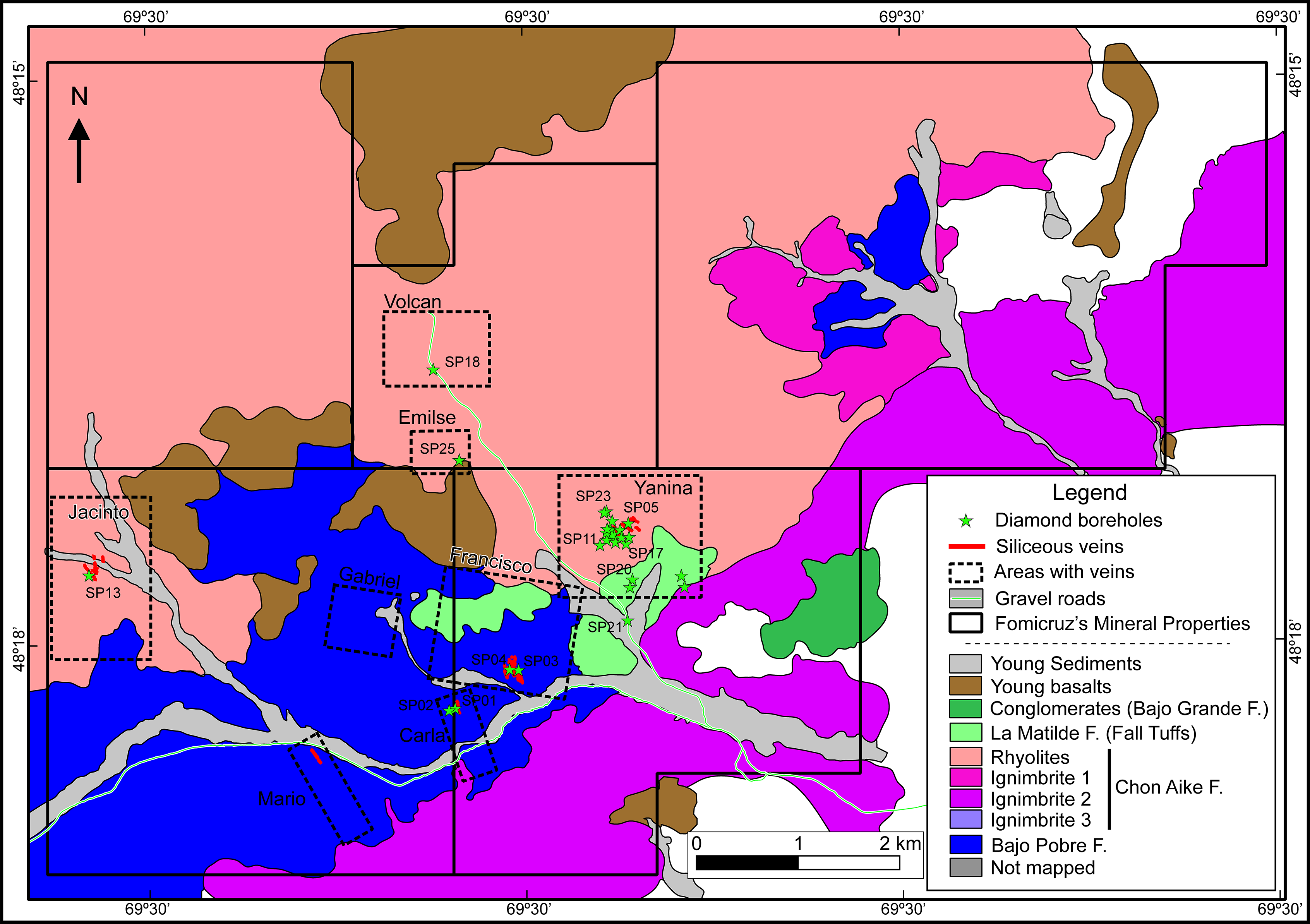