The most relevant geological features are two quartz veins of considerable extension and width, and other minor veins located around these main structures. 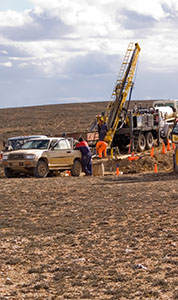 The Cerro Chato project is located in the northeastern sector of Santa Cruz province, at 65 km to the northeast of Tres Cerros locality and at about 35 km east of the Don Nicolas Au-Ag mine. The project comprises five mining properties covering a total area of 15,000 ha. The most relevant geological features are two quartz veins of considerable extension and width, and other minor veins located around these main structures.

One of the two main veins, called Silvia, shows general northwest orientation and dip of 65⁰ to the southwest. This vein has a length of 1200 meters, and an average width of 1 to 2 m, with sections reaching up to 5 m. At surface this vein is hosted by Ignimbrites and tuffs of the Bahía Laura group, but at depth it is partially hosted by granodiorites and sandstones of the La Leona and La Golondrina Formations. The vein shows massive quartz, and locally some banded silica and replacement textures of calcite or barite; there are also hydrothermal breccias and stockworks.

The other main vein is called Alejandra, and includes two subparallel veins of NNE trend, separated by a distance of 50 to 200 m. The main vein has a length of 3400 m, while the secondary one extends for about 1200 m. The veins have widths of 1 to 2 m, reaching up to 20 m in some areas of breccias and stockworks. The host rocks are from the La Golondrina Formation, except in the extreme south where the vein is hosted by granite of the La Leona Formation. The quartz in the vein shows mainly massive texture, although it also shows relatively abundant replacement textures.

Detail mapping of the veins, rock-chip geochemical sampling, and the drilling of four boreholes (~1000 m) were carried out in the Cerro Chato project. The boreholes confirmed the continuity of the veins to a vertical depth of at least 250 m, but the concentrations of gold and silver detected were low. However, the geochemistry of the boreholes remains incomplete, since much of the drill cores were not sampled at the time of drilling, even many intervals containing abundant veinlets of quartz and sulfides.

In the Silvia Vein, a borehole ran through 27 m of rocks with fault breccias, and veins and veinlets with massive quartz and sulfides, at about 65 m vertical depth. In the Alejandra vein, at about 100 m depth, a drilling went through the main vein to about 100 m depth, showing 19 m of rocks with veins, veinlets and breccias; a second drilling first traversed the secondary vein (separated about 100 m from the main one), and then intercepted the main vein and innumerable veinlets that are located around it; this second intercept, at a vertical depth close to 250 m, it is represented by almost 58 m of rocks with veins and veinlets along drilling.